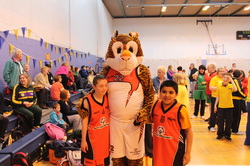 The 9th Annual Killester Special Olympics Jamboree was held in the Irish Wheelchair Association in Clontarf on Saturday May 18th.
Nearly 100 athletes representing Clubs from Bray, Leixlip, Lucan, Sports Club 15 and Killester, took part in a great days basketball.
Following a parade of the Clubs, the day opened with the reading of the Special Olympics Oath by Killesters Natasha Rickaby
When the formalities were over it was down to the serious business of Skills and 4v4 Divisioning. Very quickly the athletes were in their stride and the gym was buzzing with everyone making their best efforts.
The Special Olympics Oath: “Let me win, but if I cannot win, let me be brave in the attempt”, was being displayed to the highest standard by all of the athletes.
The excitement at the shooting, passing and dribbling stations was there for everyone to see. While the teams competing in the 4vs4 competitions were giving the Commissioner Martin Grennell a lot to think about as they showed off their basketball talents.
Volunteers, families and spectators alike were astounded at the talents on show, high fives everywhere, and it was smiles all round as Divisioning came to a close. 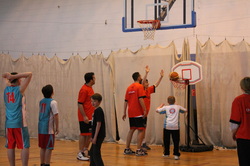 As the Commissioners and volunteers studied the Divisioning scores and got everything in place for the Competition round later in the afternoon, there was a surprise for all of the athletes. Members of the Killester Men’s and Ladies Superleague teams arrived to play the traditional challenge games against the athletes taking part in the Jamboree.

A great show was put on for the big crowd with great skills on show, dunking, 3 pointers, dribbling and passing skills were the order of the day. The crowd got behind their teams and the atmosphere was electric. The games ended all square, with the Special Olympics athletes scoring on the buzzer to tie things up, against a disappointed Superleague squad.

Following the Superleague games, a special presentation was made to the members of the Killester Division 5 mens team, who have progressed through the Special Olympics programme, and are now playing mainstream in the Dublin Leagues 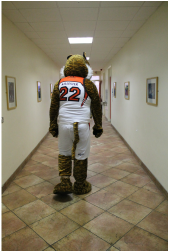 After the excitement of the challenge games, competition resumed in the Skills and 4v4. The standard was really high as the athletes played in competition. Great baskets being scored, passes and shooting again of the highest standard. All the while, the spirit of Special Olympics was there for all to see, with smiles all round and everyone enjoying a great day.

When competition ended and it was time for the results, there was even more excitement as Tony the Tiger entered the gym and high fived athletes, volunteers and guests alike.

Each athlete passed the Volunteer “Guard of Honour” to the sound of  “We are the Champions” as they went to receive their medals from the guest presenters, Gerry Kelly President of Basketball Ireland, Ciaran Rowe and Lisa Kinane, Killester Superleague squad members.And so it was finally time to go and say goodbye to another great basketball season. What a great year it has been for the Killester Special Olympics Programme as it continues to prosper and grow

A huge thanks to all of our volunteers, a large number of who are members of Killester Baskeball Club, to the Superleague Players, our resident Ref, Pat Maher, Tony the Tiger, The Garda Siochana, The Order of Malta and all of the families and friends who made the day so special. A special word of thanks to the President of Basketball Ireland, Gerry Kelly who spent most of the day with us and assisted with the medal presentations.

Here’s to next year when we will be celebrating the 10th anniversary of Killester Special Olympics. Hope to see you all then.