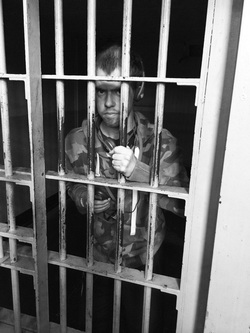 Last August I went with my mum and dad to San Francisco and one Monday I went to the Island with many names such as The Rock, Hellcatraz. Alcatraz in the middle of San Francisco Bay.The boat ride to Alcatraz was very long but When I got to The Rock I felt the presence of ghosts of past in mates around me then I went on an audio-tour and my dad thought it would be funny to close the door while I was in a SOLITARY COMFINEMENT CELL! I couldn't see thing even when I put my hand right in front of my face I couldn't see it the first time I tried to get to the door I walked straight into the wall which hurt!  My second attempt to get to the door I somehow managed to get out. Being in a normal cell is creepy especially when you know one of the worst of worst was held in that cell such as Al Capone, George Machine Gun Kelly and the Anglian Brothers.

Now here is something you know you break the law you go to jail BUT IF YOU BREAK THE RULES IN JAIL YOU GO TO ALCATRAZ!!!!! If you were an inmate on Alcatraz you didn't have an identity, hell you had a number like 2245780. That is how you would be addressed,  by your number. Alcatraz is exactly a mile from the mainland of San Francisco.
A MEMORY OF AN INMATE
I got arrested for robbing banks. From the age of sixteen I was held in Mc Neal Penitentiary. They called me uncontrollable and unholdable because I kept on escaping so I got sent to Hellcatraz and I lost my name My number was 11004668 that’s what I was known as that number only. 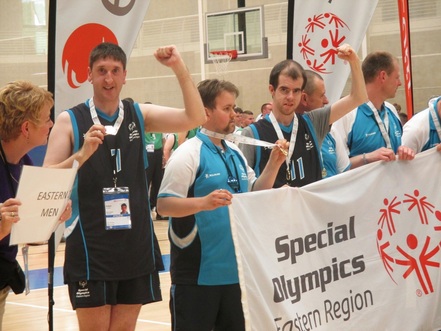 In June I went to Limerick to compete in the Basketball National games that were held in UL.


When we arrived at Limerick Station there were double decker buses waiting for us and an army truck was there to take our bags to our accommodation on the campus of UL. All the buses that the athletes were on had a police escort which was kinda an exciting experience to have. After we had dropped our bags in our accommodation we got back on the buses to go into the town for the opening ceremony march. The sides of the streets were packed with people and family members of athletes and who wanted to support the games I gave some high fives and a toddler even gave a high five. Then we entered The Peoples Park and took our seats to await the opening ceremony and the lighting of the torch.


The first basketball games that were played were divisioning games to see what teams would be a good match for each other and in our serious matches we played as a team and a few injuries were received but that’s to be expected at every competitive level of any sport.

At the beginning of each match we wished the other team the best of luck  and waved at our cheering supporters. My grandparents came from Waterford to watch me play two of my games and friends of my mum that live in Limerick came to watch two games as well especially what I call the gold medal game which we won.

THE HALF-TIME GAME
by Hugh O'Callaghan 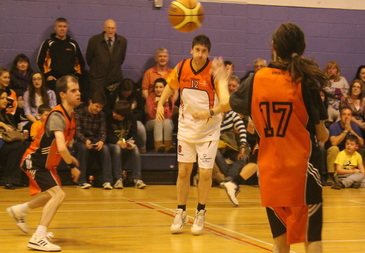 Hugh and David in action for the Oranges, against Adam for the Whites
On Saturday the 8th of March 2014 Killester’s men’s team had been asked if they would like to play a half time game at a national league match. At halftime myself and my team changed into our gear and walked onto the court to a load of cheering.

There two teams made up of my league team and Fionn from the development squad and Christina from the ladies team. The teams were oranges versus whites.
I really enjoyed playing the game because it entertained the crowd.
The crowd has absolutely loving the half-time entertainment.
After the match was over my team got to meet the entire Killester national league team